Developed in France, Cryoskin is a alternative modality focusing on fat removal and skin toning. The treatment involves hypercooling the superficial tissue layers of the body to subzero temperatures in order to activate and stimulate cells in the body, resulting in reduction in fat cells and collagen production in the skin.

There are 3 types of Cryoskin treatments: CryoSlimming, CryoToning & CryoFacial. All treatment options are non-invasive and 100% pain free! ****Before & After Pictures are 8 weeks post final treatment (as results continue to improve up to 2 months after your sessions)

Cryoskin Slimming is a 28-minute treatment that applies both heat and cold into the superficial tissue layers of the body. The Cryoskin treatment process involves the application of drastically alternative temperatures in consecutive stages, resulting in the destruction of fat cells which then passed through and processed by the lymphatic system.  This treatment can only be performed every two weeks to give the body enough time to actively recycling fat cells through the lymphatic system.

Cryoskin Facial treatments are also 20 minutes in duration and utilize only cold therapy to increase local tissue metabolism and increase local blood circulation. Utilized to reduce fine lines and wrinkles, tighten and tone the skin providing a natural alternative to botox. Facial treatments are NOT recommend IF you have had botox or fillers in the past 12 weeks. *Decolletage area can also be included in this treatment. 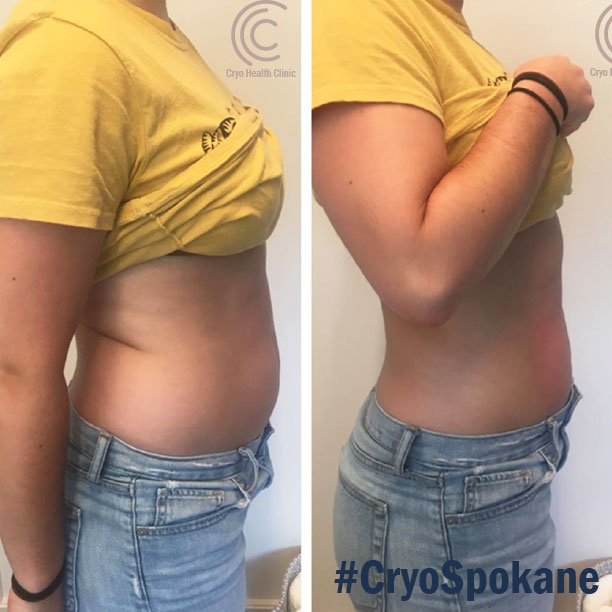 WHAT ARE THE BENEFITS?

The device is very safe. In terms of programming and electronics, it is managed by a computerized Windows system. The cooling system is controlled by an electronic temperature sensor located in the processing head of the device and the temperature is controlled in real time by a curve and figures displayed in real time on the screen. In the event of a malfunction, the device alerts the operator by sounding a tone and displaying an error message.

The machine itself functions by a Peltier effect (thermoelectric cooling) regulated by a hydraulic system which ensures a very high inertia which is absolutely necessary for the correct application of the treatment in a minimum
of time. These characteristics, which are very difficult to obtain, make it possible to enact a very rapid cooling of the fat tissues while avoiding the risk of lesions of the skin tissue due to an application that is too long. The principle of the treatment is to lower the temperature of the fat cells enough to cause what is called the phenomenon of apoptosis. This phenomenon is triggered when the temperature of the fat tissues is between 17 and 12 ° and consists in
a self-programming of the death of these cells..

What are the benefits?

The major benefit sought is a large decrease in fat mass which was visualized by CT scans and measured between 15 and 40% according to the subjects tested. On the other hand, it must not be forgotten that the apparatus is not only capable of emitting cold but also of heat and of causing the two to alternate, thus causing “thermal shock”. This method of thermal shock is medically recognized to be particularly restorative for tissues by significant increase of local microcirculation and collagen.

How does it feel?

The feeling is rather pleasant thanks to the start of the treatment which is generally done with a short period of skin warming and a gradual but rapid decrease of the temperature. At the end of the treatment, the thermal shock appears very quickly, which gives a feeling of warmth and lightness at the same time.

Who should NOT participate in Cryoskin treatment ?

Individuals who fall into any of the below groups of contraindications should not participate in Cryoskin treatment. Consult your physician or doctor if you have questions whether you are healthy enough to participate.
– Raynaud’s syndrome
– Allergy to cold
– Pregnant woman
– Strong diabetes
– Cancer.

How often can I do it?

The usual frequency is 1 treatment every 15 days (for slimming treatments). In some cases this can be reduced to 10 days by the addition of additional drainage treatment but is not necessarily recommended. There is a physiological reason for this: when apoptosis occurs and some fat cells die, waste is formed. This will be eliminated by natural routes (blood, lymphatic
system, and then urine). Metabolism must therefore be allowed to evacuate this waste without overloading the circuits. Toning treatments can be performed once every week.

Can I exercise before or after?

What do I need to bring to my appointment?

Nothing. If anything, the best possible diet and lifestyle to accompany the treatments (drink plenty of water in particular).

How does the treatment work?

As already described above, the treatment works by triggering the phenomenon of apoptosis of the fat cells. This is achieved without risk to the other tissues (in particular muscular tissue) by the fact that the intracellular electrolytes of the fat cell are the first to crystallize in the cold before all the others. This crystallization is information brought to the cell to program self
destruction. One could say that cryotherapy is a homeopathic treatment specific to the fat cell. (Homeopathy consists in inducing information to certain molecules).

How does Cryoskin get rid of cellulite?

The answer was given above. It should be remembered that it may be important to add drainage treatment once or twice a week between sessions.

Do I lose weight with this treatment?

It is very common that there is a loss of weight during the treatment. This is due both to the loss of fat mass but also to the drainage techniques (exercise, etc) and the diet and lifestyle required.

How does Cryoskin help me appear younger & more youthful?

As previously seen, the Cryoskin machine is capable of causing thermal shock due to its ability to alternate rapidly and automatically between periods of skin warming (up to 40°) and cooling (up to -8°). This phenomenon causes a very strong increase in the local metabolism and an acceleration of the microcirculation which are both responsible for the production of collagen. The collagen thus brings elasticity and toning to the skin and makes it possible to visibly and durably combat skin aging.

What is the difference between Cryoskin and other cryotherapy treatments (like local cryotherapy or cryofacial?)

There are other manual cryotherapy machines. But tests and experience have shown that no other machine is currently capable of an inertia as strong as the Cryoskin. This inertia is due to the fact that the device does not only produce
cold. It works by heat exchange with the body and the ability to descend very strongly and very quickly the temperature of the tissues by absorption of calories, accumulation of calories and evacuation by a system equipped with a ventilated hydraulic radiator.

Why is there a maximum frequency of 1 treatment every 2 weeks?

The phenomenon of apoptosis is a natural phenomenon. A programmed natural death of the fat cell. The latter is not destroyed by a phenomenon of cavitation which would make it explode and create cell waste which would be very difficult, or impossible to eliminate. This is a self-destruction specifically for fat cells, whose ingredients are going to be removed slowly and naturally from the body at the rate of metabolism.

How long does a single treatment take?

10 minutes is the time to be sure to get a result (although please note that certain treatments will be longer (i.e. stomach etc). It is not an issue to prolong this treatment for a few minutes if necessary. This also depends on the
morphology of the person being treated and it may be useful to treat twelve to thirteen minutes in cases of larger fat content. The high performance of Cryoskin renders a longer application unnecessary and thus avoids any risk of deterioration of the surface tissues and in particular the surface nerve receptors which are irreversibly destroyed by the freezing of the suction machines. This in some cases causes severe chemical burns.

Can I participate in Cryoskin treatment if I am pregnant?

Like any external treatment, this is not advisable and of course forbidden on areas such as the tummy, breasts or even the hips. The safest is to abstain from treatments altogether.

Are there any side effects?

There are few. Sometimes localized redness that disappears after a few hours. Sometimes some local pain that rarely exceeds 2 to 3 hours. There may also be some itching without consequences and often due to the reactions of certain cosmetic products used by clients. Hence there is interest in asking clients to not use anything before coming to do the treatment because some products can crystallize to the cold and cause discomfort.

Are there any risks associated with Cryoskin treatment?

The risks concern only people with contraindications mentioned and remain minor and temporary.

How quickly will I see results?

The first results are generally visible from the first session and often very encouraging. However, it should be noted that the best results appear from 15 days to 3 weeks after the start of treatment and extend for several months after the end of treatment.

How long do the results last?

Depending on the individual and depending also on their lifestyle and diet, the results last several months or several years. It is advisable to practice 2 or 3 sessions 6 months after the end of treatment to maintain results.

What is the difference in the 3 different Cryoskin treatment types?

What is the minimum age of someone to participate in Cryoskin?

The minimum age is 15 years old.